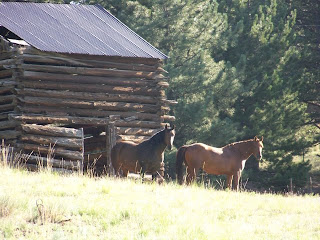 Major. Big. Beautiful. Full of Attitude! This is the horse I purchased in oh about 2003 to ride and work with while my little palomino foxtrotter mare healed up from the minor cut she got in my pasture that blew up into a major event. So, she was out of commission, her colt, 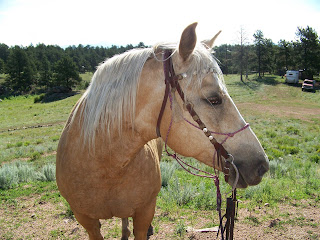 Luke (as seen in other blogs) was too young to ride, and I found Major. He was a project. 12 years old. Hanging in a pasture knee deep in rich grass, a bin full of alfalfa, a bucket full of oats! Boy, was he friendly, and spookey, and just really full of himself....I think he realized his size at a young age and took advantage of it! He was hand fed every treat you can think of from carrots to p-nut butter crackers in the last few years, and managed to plop his big size 1 paws on just about everyone's foot while going for the goodies! He tried that with me, too. 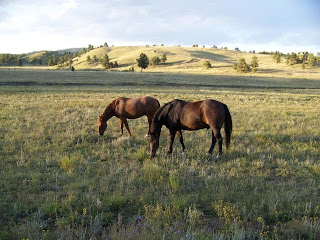 I got him home and let him chill in the round pen for a couple of days before I could get around to working with him. He loaded lickety split in the horse trailer, a very good sign. He has had some great handling, and some bad run ins somewhere down his road too. He was really head shy. So I had to un buckle any bridle I placed on his head. He was a foot stomper and a crowder. This is all just ground stuff. We worked, went round and round, and he learned the benefits of staying out of my space, I learned the benefits of patience, kindly waiting for him to find the right way to go while trying to be clear as possible in my direction. 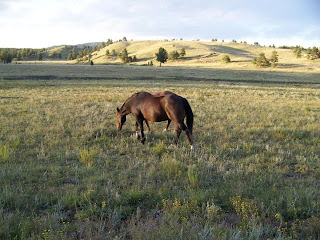 He can really snake that head and neck around! We learned.
When I first saddled him and rode off, he was tenative, and wired pretty tight. We rode to the gate and back without incident. I was pleased! A bit bouncy, and a head tosser, resistance and evasion of the bridle were really a problem....and anxious and really bound up with energy. 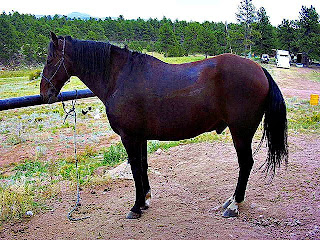 So I rode a couple of times alone like I always do and got to know him while he got to know me. I put him in a snaffle and learnt him to bend and flex and wait wait wait....we went around in a lot of circles. He learned to back up and soften and find the right feel. We were getting along pretty good.
I took him up to the Buffalo Peaks in fall of 03 or so, with a large group of trail pounding foxtrotters....about 20 or more of us, for a long 20 miler and overniter at the camp site. Oh boy! He got pretty energized and was bouncing and bounding all over the place, really having a problem listening to me so the best I could do was damage control to keep him in a straight line, off of the front riders butt and from getting off track and bouncing other riders off any trail. He got real nervous when ridden next to or if anyone got in front of him. So I decided he was "group challenged". Obviously!
The next morning bright and early I gave him a full dose of Calm N Cool paste. Let him chill for about an hour....saddled, picketed to the overhead line. He did fine on the line, I was happy with that, he was great in camp, not attached or whinnying for a buddy or pawing, stomping or causing a ruckus so many horses in camp do when seperated from their home territory. He was awesome. I saw potential
Off we went on the group, and as always, we start out gang busting down the trail, each horse vying for first place to nowhere as they get the boogers and out and they calm down....Major was right there...but I noticed a change, just the slightest....a bit more communication with him as I eased him into a place in line back away from the front of the group. A combination of calm n cool plus being a bit tired sure helped me! We had much better luck that ride, my friends helped him to back off their horses by swinging a rope at him when he got too close instead of me pulling back all the time. He got the picture. We had a pretty decent ride, and the terrain was challenging, climbs, cricks, rocks, trees logs & more..long, and oh, did I mention that we started the day off in a snowstorm? I rode that day in my winter snowsuit. O yeah 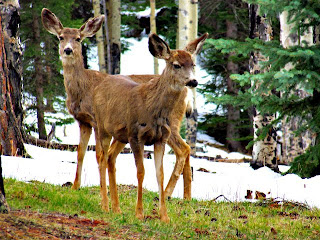 That was a great summer of fast riding trails, hauling to new places, riding and getting to know this big horse full of himself...he got to trusting me and I got to know that I could trust him. By the end of summer we were leading rides, trailing rides, he was in a full bridle with a grazing bit with a mild curb action and light on the head...still had to unbuckle the bridle to put it on but we were making headway. Fall came and out he went shoes off play int he pasture til spring of 04 and new rides.
Spring of o4; the palomino mare is in great shape and she got the majority of riding, I worked the colt some and left Major to guard the pasture. He got not a lick of riding that year, or for 3 more years after that. Fast forward to today, Fall of 08. A LOT of water under that bridge. A nasty cut that put the Major horse in a cast for a couple of weeks and in the 12 X 12 "cut pen" that is up by the house. Changing wraps, medicating, changing casts, then fall came and went and he healed and hardly got touched except for the obligatory filing and trimming of his big paws. 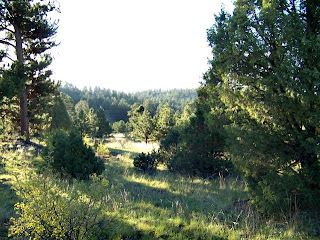 About a month ago my main ride, Luke, fell and skinned his knees down to the knee capsule on one and pretty bad on his other. He's out for the season and spending time in the 'cut pen" with daily wrap changes and tending. I eyeball the big guy. Whats he going to be like after 4 years of good grass and not much handling? Oh, I fed him treats, he stands like a king for his feet trimming and shoeing, but sure has a lot of play in the old boy. I needed a horse. He's up.
Here we go. So, saddled, he looks good and obviously needs to loose a few lbs. Hes still got a major attitude, but no longer plops those big paws down on your toes and respects your space for the most part. A good sign. We jump in the truck and pony his big butt down the road about 2 miles keeping at about 6 miles per hour. Major tires but keeps coming. We pony back. He is hot and sweaty. I move him out in a small circle on the ground. He looks good. I climb on. He stands like he has been asked to. But thats it, we don't go anywhere! Ok, barn sour. I get it. He is still in charge at this point.
I am happy with a few turns, backing to see what kind of mouth I have, so I unsaddle him and turn him out for the day.
In the next days we saddle and get on again. We head out to the gate, he balks, pitches a fit and refuses to go. So when we get to that point I get off and he goes in circles, turns back, backs up, moves his front end off pressure and his back end also. Then I get back on til it happens again...that point you KNOW you better get off or you're gonna get off and it ain't gonna be pretty....horse all full and tight and bound up something is gonna explode. Be sitting deep. Off I go and in circles he goes. We get to the gate but I am happy with just working him around and back we head to the house, circling, walking, backing and staying calm. 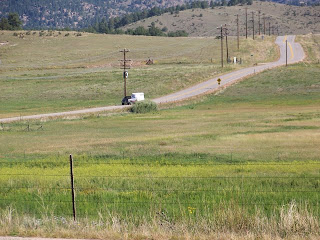 The next time I get on him is at Muller State Park...yes, off the property, so he does NOT have any excuse to turn back cuz there ain't nothing there but more trail! We had a great ride, worked a little on him softning to my feel and waiting and staying in a Foxtrot. Success! 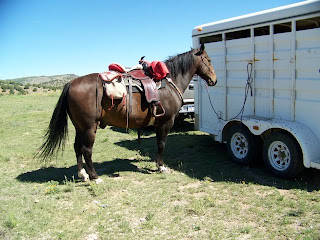 Today we are riding quite a bit, alone, in groups, he's still a bit group challenged but I see the changes, he is willing to listen to me and find the easy way out instead of fighting me. He doesn't toss his head near as bad as he used to, he still "digs" a bit on the bridle, but overall I 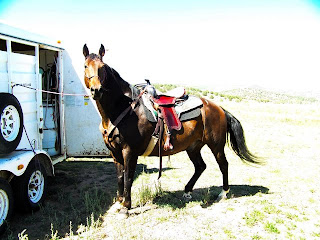 am really happy to be on board again. This big giant of a horse is steady and reliable on the trail, sure footed an confident over some tough stuff up here in the Colorado Rocky Mountains. He is gate challenged, I have not ponied anything off him, yet. He does not like things dragging. But that just gives me something to work on. We have many a trail to explore and ride still. So, I am posting some pics of this big gentle giant for you to see. They are not much, but they are what I have. 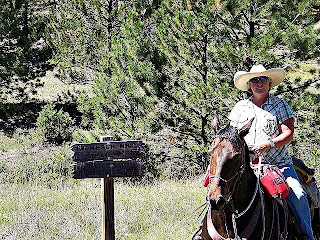 If you get this far and are still reading, email me if you wish, at carrie@goldcountryco.com

I sell real estate in this beautiful country.